Birthday and Anniversary Give Away

It's is that time of year once again.
Time flies by these days and I hear that is sign of old age. hmm lol
Well yes it is October and I will soon be having another Birthday and it just so happens
that around the same time of year it is my LunaEssence.etsy.com yearly Anniversary.
Actually Luna Essence was conceived around September 2008 but I joined Etsy in November hence the date.
I love a good party and would love to give back to all of you beautiful people, so yearly I have a Give Away!

The beautiful Crystal Pendant below will be the first prize offered.
There will be questions that you will have to answer correctly and I would love to see your hearts on my LunaEssence.etsy.com shop.

I will be back to open the Contest this SUNDAY OCTOBER 22, 2017!
SEE YOU SOON
DIANA 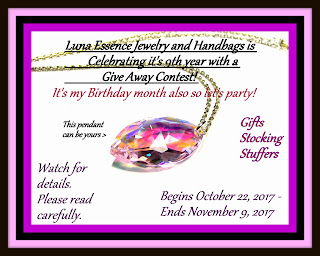 A delightful feature by Debbie and John Rogers of Thunder Rose Leather shop on Etsy Thank you !!

Diana Marie LaRocca Saputo  of Luna Essence is This Weeks Featured Artist on Share the Love, Blogger’s Unite Gemstones intrigued me , of course what girl doesn't love jewelry? At Luna Essence you will find Handmade Earrings, Bracelets , Pendants , Vintage, Necklaces and Handbags. All ship within one business day . Jewelry comes in Gift Boxes . Plus once you make your purchase -You will receive 10% OFF with a TULUNAESSENCE COUPON CODE on Purchases of $20.00 or more

Stunning Designs for a more stunning you!

Grab the Code for your Blog HERE


Are you On Fire for Handmade? http://onfireforhandmade.com Shop at On Fire Gift Guide! https://onfiregiftguide.com